Cologne coach Olaf Janßen brought four new ones from the start after the 1-1 against Halle: Koronkiewicz, Buballa, Fritz and Palacios. Jastremski and Siebert took a seat on the bench, Heister and Klefisch (injured) were not in the squad.

The starting point before the game was clear: It was the last league game for Kaiserslautern, who has without play next week and had to make up for the gap to Braunschweig to still have the chance to have direct stake.

Accordingly, the FCK put pressure from the start - inspired by the massive fans who had traveled with the Höhenberg sports park before kick -off. But after a good start -up minute, the red devils lost the thread and let the home side come into play better. Philipp marked the first end of the Viktoria (10th), which was repeatedly fire -safe with long balls. 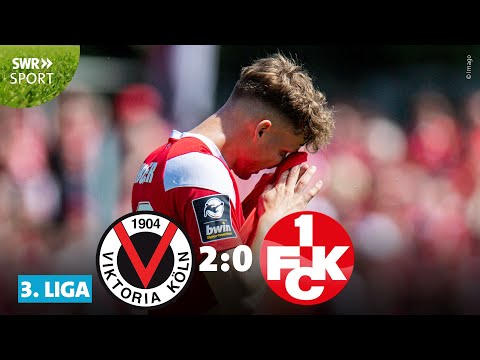 After a corner - it had become apparent - Fritz then scored 1-0 for the home side (26th), Palacios missed the second goal only two minutes later (28th). Kaiserslautern immediately left the answer by Redondo (29th), but had to look back again. After a quickly played counterattack, Philipp pushed in to 2-0 (38th). The FCK could not free itself until the break, but was still under pressure, Raab prevented the double pack from Philipp (44.).

Lautern gets going slowly - Boyd only hits the crossbar

After the break, it took a while for a game flow to come about. Many interruptions disturbed the urgently needed offensive spectacle of the guests, who slowly got rolling. Sessa, who was substituted for a break for free kick specialist, took a resting ball over (54th) before Philipp missed the preliminary decision with the 3-0 (61.).

Then only the FCK played, the Cologne residents only moved to the defensive - and were very lucky with a multiple chance. Boyd only hit the crossbar, then Nicolas Stark parried the volley of Redondo (64.). As a result, the red devils again struggled against the compact defensive of the Viktoria, which threw everything into it to finally make relegation. Klingenburg only came to the volley from 16 meters (73.).

With increasing season, faith among guests who did not get through against a combative strong Viktoria. Significantly, the last chance of the game was a effort from Cologne Koronkiewicz, which failed freely in front of FCK keeper Raab on the keeper (90.+1).

Viktoria Köln is a guest on the last match day in Braunschweig, while Kaiserslautern has play -free because of the withdrawal of Türkgücü Munich and is only again challenged as the third in the table in the relegation against second division Dynamo Dresden.